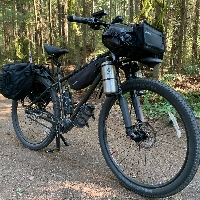 Hey gang. Those of you that know me know that I’m an independent filmmaker, more specifically the co-director of the “The Blair Witch Project” among several other films. What you may not know, is that I also love bike-packing. As a recent convert to this amazing form of adventure and inspiration, I’ve taken on the ambitious task of attempting one of the longest off-road, mountain bike trails in the world, more commonly known as the Great Divide Mountain Bike Route, (GDMBR). It’s effectively a combination of back-country trails, gravel roads, fire access roads and open wilderness that will take me from the American/Canadian border in Rooseville, MT all the way down to the American/Mexican border in Antelope Wells, NM. Yep, 2,569 miles of solo, unsupported, bike-packing goodness! It crisscrosses the Continental Divide numerous times over the span of five states to the tune of 156,000+ feet of total elevation gain, (That’s like biking up Mt. Everest 5 and half times!). I will be attempting this feat in two stages; The first of which, (1,429 mi), starts on August 1st and will hopefully end in Steamboat Springs, CO approximately four weeks later…if all goes well.

The second stage, (1,140 mi), will pick up in the Spring of ’22 when the weather becomes more cooperative through the southern portion of Colorado and over desert terrain of New Mexico, (see map).

The reason why I’m telling you all this, is that I hope to bring some awareness to the value of experiencing the world by bike, not just the incredible sights this planet has to offer, but the incredible people as well. In addition, I’ll be raising funds for a charity that I feel is incredibly instrumental with helping so many in need, that is The Wounded Warrior Project. Regardless of your political leanings, this is a worthy cause for many of those folks that have sacrificed so much in order for goofballs like me to go on rides like this. Please donate to my foundation page below any amount you can and feel free to follow my progress on this page starting August 1st if you have a few minutes to kill or just love watching me suffer.